A [Not So] Secret War

Terra Nullius and the Permanent State of Exception

One interpretation of international law has it that people can prove their sovereignty by their ability to make and maintain laws, and their abilty to declare war. Looked at that way, war is not only something civilizations do – it is something they must do in order for their right to self–rule to be respected.

In March 2003, as Australia prepared to send troops into Iraq, two activists painted the words ‘No War’ on the Sydney Opera House.

But there was – and is – a war. After all, war is what makes the world go ’round.

War is an act of civilization. War and law go hand in hand. They govern each other so tightly that those who wage war often prefer not to call what they do ‘war’ to avoid having to abide by all the rules and conventions that have grown up around conflict.

Due to war or civil disorder or natural disaster we might find ourselves in situations where laws are suspended – in a ‘State of Emergency.’ Like in Haiti after a major earthquake in January 2010 killed hundreds of thousands of people…

In Sri Lanka through more than 20 years of civil conflict…

And in Australia where the Northern Territory National Emergency Response was introduced in the lead up to a federal election.

Extreme circumstances can create a ‘State of Exception’ where the rule of law is put aside. Ever since September 11 when hijackers flew planes into New York’s Twin Towers, a State of Exception has justified a ‘War on Terror’. A war that includes the war in Iraq – the war that the Opera House activists made such a scene of objecting to – and the war in Afghanistan. A war not likely to end any time soon.


Teenage Riot
In February 2004, Aboriginal teenager, Thomas ‘TJ’ Hickey met a violent death, impaled on a fence behind a block of units in the Sydney suburb of Waterloo. He was last seen riding his bike at high speed from the neighbouring suburb of Redfern. Two police vehicles were nearby.

From around the state mourners gathered in the community commonly known as ‘The Block’. That night, angry youth spilled out on Lawson Street. Throwing bottles and bricks at Redfern Station, they vented their frustration on state property and at the rows of riot police that had formed that afternoon in this ‘Space of Exception’.

In full view of the international media, their ‘riot’ unsettled the ‘relaxed and comfortable’ national image that Australia projects, revealing an unresolved legacy of colonial violence.


Bring the Troops Home
In 1901 the six colonies of Australia federated, and in 1915 they went to war. Prime Minister Billy Hughes declared that “Australia was born on the shores of  Gallipoli” where more than 8,000 young Australians died fighting. But what about  the war back home?

The War Memorial in Canberra enshrines the tomb of ‘The Unknown Soldier’ one of the nameless thousands who died fighting in a foreign theatre of war. To enter this shrine you must first pass through a courtyard enclosed by walls that feature  a series of sculpted heads. Hung like hunting trophies, they depict the various animals the British settlers found when they came to this continent. Alongside the stairs that lead up to the shrine are the heads of an Aboriginal man and woman.

As you enter the tomb they display the geometry of power laid down by this  foundational myth and are a startling reminder of the other Great War. After all, don’t these nameless heads represent the other ‘Unknown Soldiers’?


The War on ‘Terra’
When the British came to settle in 1788 they brought with them the idea of sovereignty, a European concept of authority by which they established their right to rule. Using the principle of ‘Terra Nullius’ – a land belonging to no one – they took possession of the land and water, failing to recognize the system of laws and land ownership already in existence.

An episode of popular Australian history involves the spearing of the first Governor of Sydney, Arthur Phillip, in 1790. A group of people had gathered to feast on a whale that had beached at Manly. Amongst them was the Eora man Bennelong. Not long before, Bennelong had been kidnapped into the British colony in an attempt to force diplomacy. It was a success as Phillip and Bennelong became friends, formally exchanging names. After some months ‘inside’ Bennelong slipped away, taking with him an understanding of the settlement and their ways.

When Phillip approached the gathering at Manly, Bennelong came forward and they exchanged pleasantries, they even toasted the King with wine the Governor had brought. Bennelong introduced Phillip to several others at the gathering including a man named Willemering, a carradhy 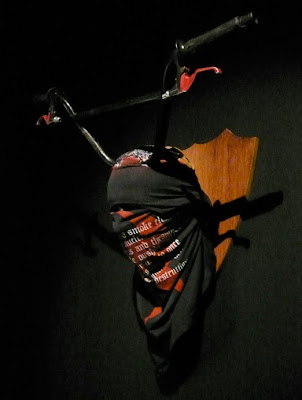 Posted by Sumugan No comments: